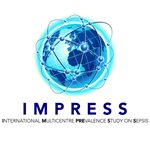 This one-day observational study on sepsis and septic shock carried out by ESICM and SCCM under the framework of the SSC.

To mark 10 years of the Surviving Sepsis Campaign (SSC), and timed to coincide with World Sepsis Day, on September 13, 2013, the SSC, ESICM and SCCM have conducted an international point prevalence study of severe sepsis and septic shock. The goal of this project was to determine the world wide burden of severe sepsis and define current practices of sepsis care internationally. The study was a simple data collection exercise for patients presenting with either severe sepsis or septic shock on World Sepsis Day.

The study looked at 1,794 patients from 62 countries who had either severe sepsis or septic shock. Compliance with the SSC bundles was tracked, as were outcomes. Compliance with all of the evidence-based bundle metrics was not high. However, successful completion of all elements was associated with a greater likelihood of survival after adjustment for confounders at both three and six hours.

The SSC is a joint collaboration of SCCM and ESICM committed to reducing mortality from severe sepsis and septic shock worldwide.