We regret to announce the death of Professor Graham Ramsay, who died in hospital on September 7th 2018. He had been in deteriorating health for some years. 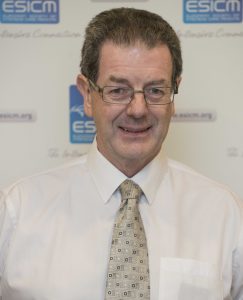 Graham was President of ESICM from 2002 – 2004. His achievements included creating the PACT programme, and founding the Surviving Sepsis Campaign jointly with SCCM. These two legacies alone would ensure that his memory will live on in the intensive care community. Training initially as a surgeon in Glasgow, he developed an increasing interest in intensive care and in research, working under Iain Ledingham on the ‘Shock Team’ where he conducted both basic science and clinical research with a particular interest in sepsis and infection prevention. Following senior clinical academic appointments in the UK, he moved to head the department of intensive care medicine in Maastricht in 1993, then became the hospital director in 2003, before returning to the UK in 2006 to take on chief executive roles in the UK National Health Service before retiring in 2014.

Graham was an exceptionally hard-working, creative and collaborative leader who was capable of taking difficult decisions while respecting and supporting the views of others. A compassionate and caring doctor, he transformed the lives of his patients and acted as an important role model to his junior colleagues. His Glaswegian demeanour was soon penetrated to reveal his warm sense of humour and great kindness to others. He will be remembered with affection and respect by all those who knew him; and by his friends and family with great love.