Which antibiotic in septic shock?

Antibiotic resistance is an increasing difficulty within critical care, yet all the evidence promotes early administration of broad-spectrum antibiotics in septic shock. Therefore, we need to choose antibiotics which will offer appropriate coverage which may require combination choices.

Empiric Combination Antibiotic Therapy Is Associated with Improved Outcome against Sepsis Due to Gram-Negative Bacteria: a Retrospective Analysis

Deciding when to de-escalate may also be difficult.

How do you give antibiotics on your unit? Continuous infusions may be attractive but it is important to appreciate that loading doses are key. Without these patients are at risk of spending long times below the MIC together with the potential instability of the drug when prepared.

Clinical Outcomes With Extended or Continuous Versus Short-term Intravenous Infusion of Carbapenems and Piperacillin/Tazobactam: A Systematic Review and Meta-analysis 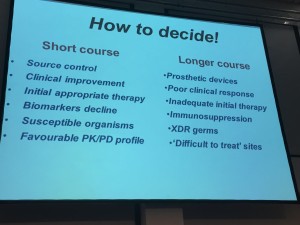 The Many Faces of Lactate

Elevation in lactate during critical illness may reflect imbalances in production and metabolism. Stress induced hyperlactataemia is not due only to tissue hypoxia or anaerobic glycolysis but may also reflect increased aerobic glycolysis secondary to activation of the stress response (adrenergic stimulation) which may be compounded by administration of extrinsic sympatheticomimetics. Failure to clear lactate has been associated (but is not predictive of) a reduction in survival with sepsis and trauma.

Failure to clear lactate in trauma and prognosis