NIV does reduce intubation rates in these patients in older trials (but at that time, mortality for intubation was 80% rather than the lower values found in modern practice)

No difference in mortality at 28 days 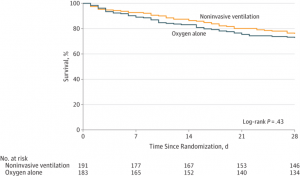 Didn’t matter what diagnosis was (i.e. solid organ or haematological malignancy). However, was powered for mortality of 35% in oxygen group and was much less than this.

No difference in intubation rates, length of ICU stay, 6/12 mortality

Conclusion: Early NIV did not reduce mortality compared with O2 but study underpowered as mortality much less than was predicted.