This year I had the privilege of joining the ESICM Social Media team as a sketchnote artist. Combining live sketchnotes with a passion for your own specialism brings a whole world of opportunities for engagement and communication – I’ve enjoyed it immensely and I would recommend it to anyone wanting to increase their GCS during a marathon conference! Here are some of the highlights from LIVES 2019: 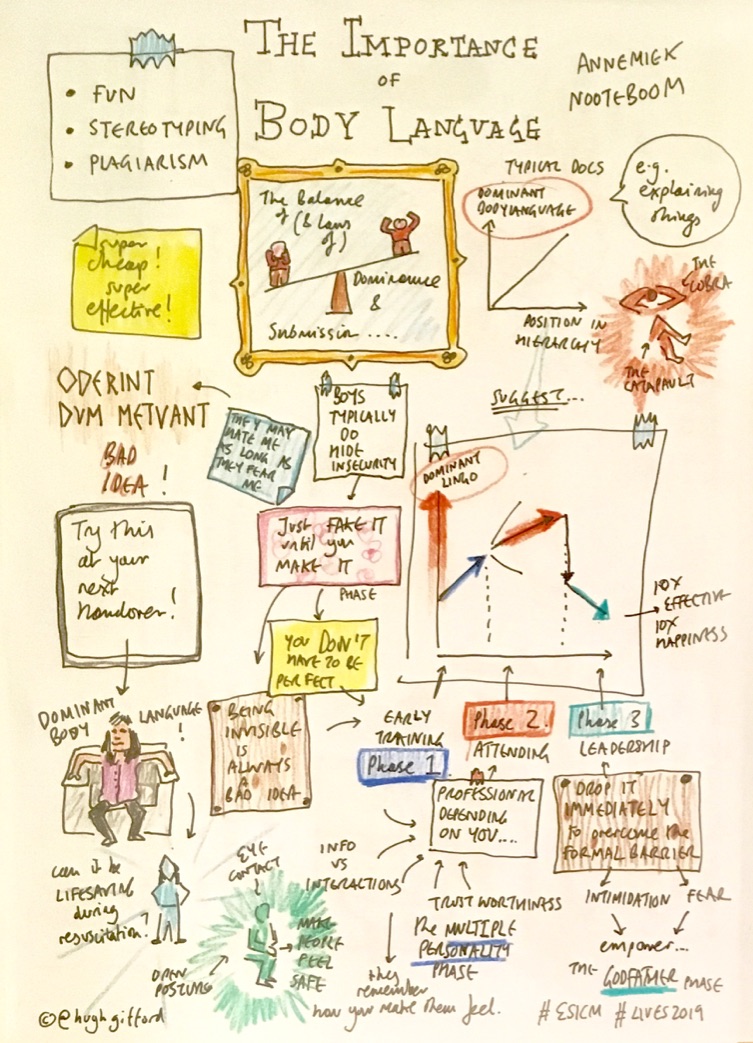 Annemiek Nooteboom: The Importance of Body Language. A tour de fource of “fun, stereotyping and plagiarism” (her words, not mine!) set alongside a stirring nightclub-style soundtrack, Annemiek Nooteboom demonstrated dominant and subservient body language. We were surprised to see Prof Armand Girbes take the counter-role; it was all a bit real. Key lessons: three phases of training include (1) fake it till you make it – don’t act invisible, (2) multiple personalities – as the boss, sometimes it’s your job to look the part, (3) the Godfather phase – in official leadership, you *must* adopt non-threatening body language to counteract the inevitable intimidation and fear that such a role engenders. 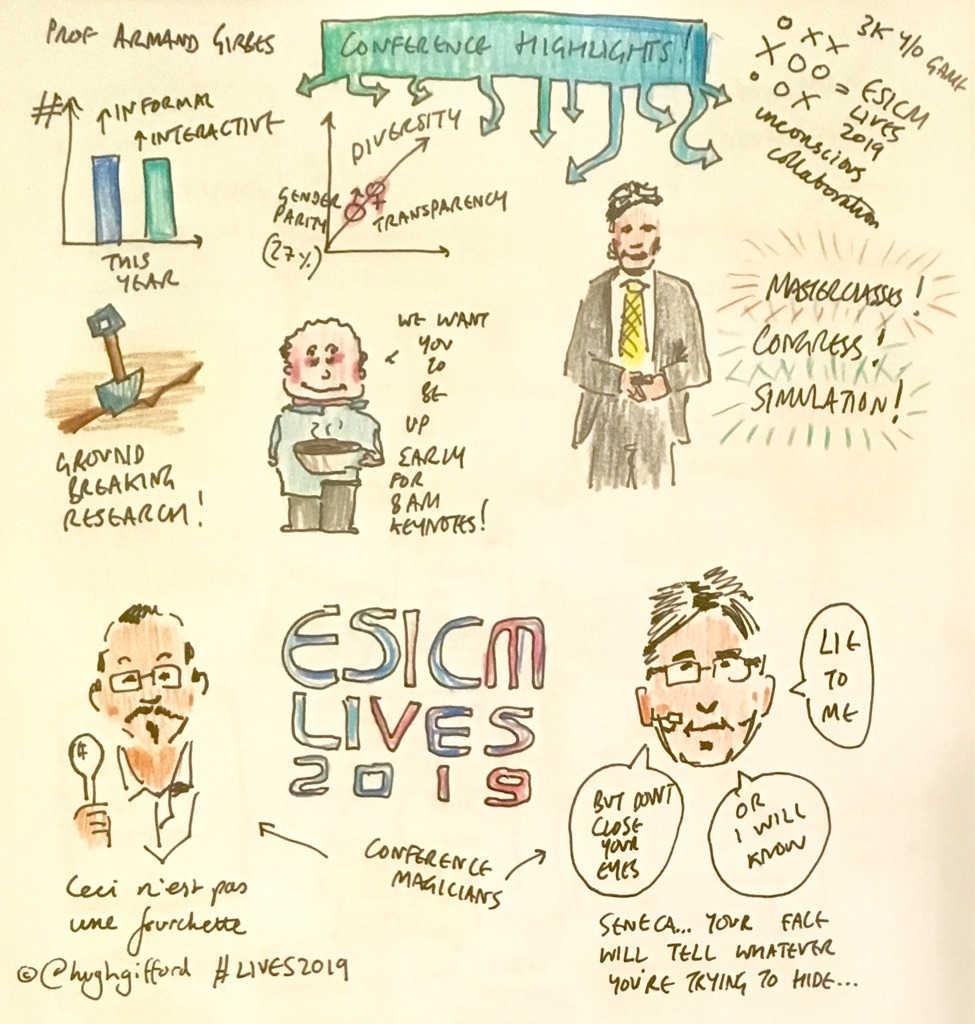 Intoduction and Highlights – Prof Armand Girbes and a pair of magicians… Congratulations are in order for the ESICM leadership, as they demonstrate further steps forward on the path to diversity and transparency. The percentage of female speakers is at its highest yet (27%). It’s possible they’ve been using magic – our entertainers were able to woo the audience “Pen & Teller” style. Most striking was the tic-tac-toe they asked the audience to choose each next move with, only to reveal on the flip-side of the game that their tile choices had spelled out the conference logo… 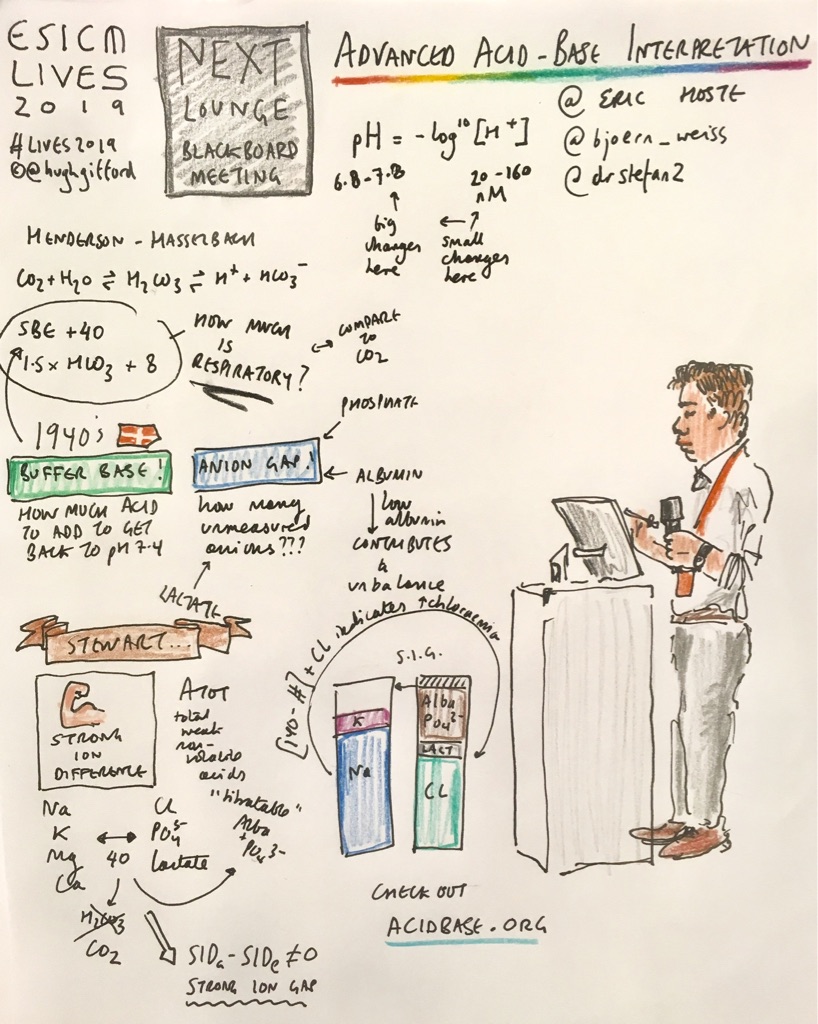 Subsequently I visited the NEXT Lounge for aspiring young intensivists for a whistle-stop tour of acid-base physiology. Eric Hoste illustrated the basics in this high-tech “blackboard” session, replete with gems of history and clinical applicability. He did well to create an interactive atmosphere with good to-and-fro between him and participants. 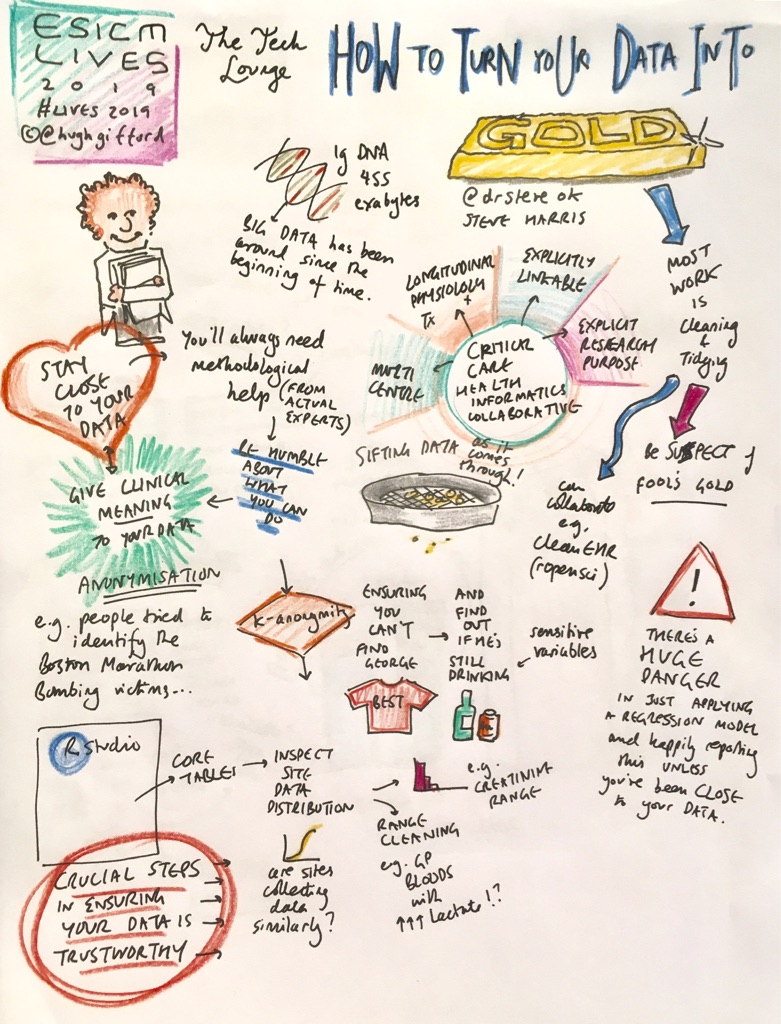 In the Tech Lounge, Steve Harris unveiled “How to turn your data into gold.” For me, the most profound insight he stressed was that clinicians may rarely ever be true data science methodology experts. However, clinicians can offer the unique and crucial advantage of being able to ensure data is meaningful for the patients we serve. This is why it’s so important to stay close to your data and ensure it’s trustworthy. 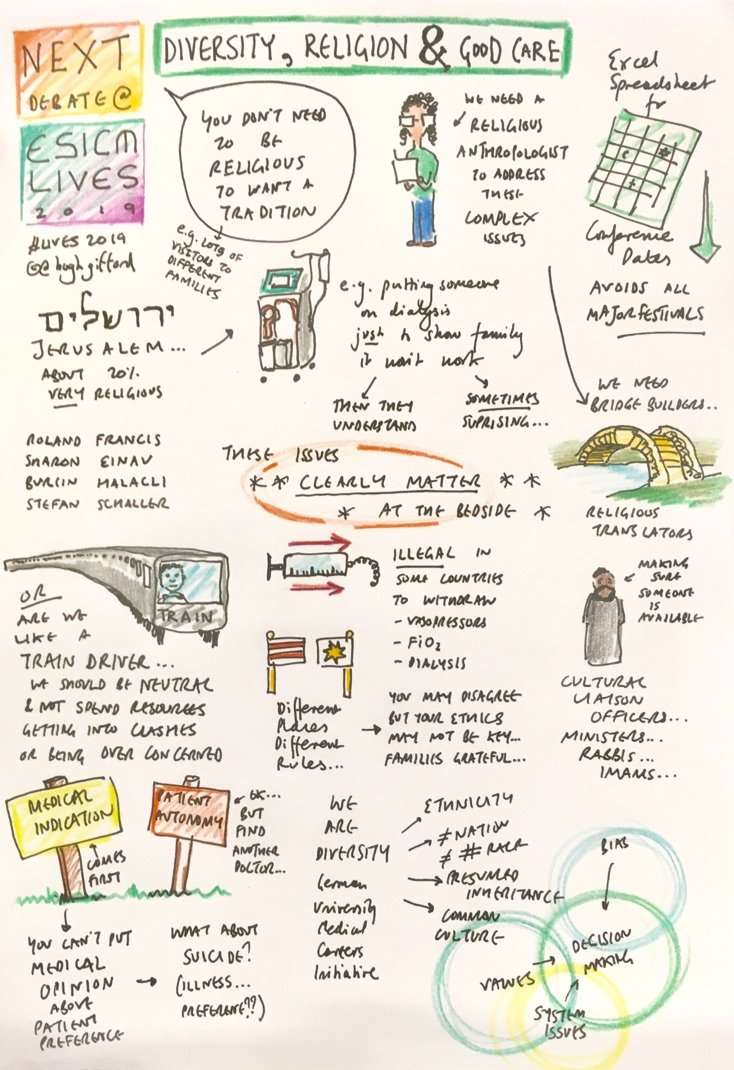 The NEXT lounge offered a thought-provoking debate into the nature of religion and ethics in providing good care. Sharon Einav described some of the profound differences in providing end of life care, in particular, in legal sanctions against withdrawal of life sustaining therapies. A helpful member of our MDT in the future is the religious and cultural anthropologists, assisting in the navigation of these highly complex issues. Furthermore, how far do we distance our own personal ethical code from that of the patients, and what implications does this have – e.g. moral distress in extended futility? A huge set of unanswered questions for consideration in the future of global ICU – with Roland Francis, Sharon Einav, Burcin Halacli and Stefan Schaller. 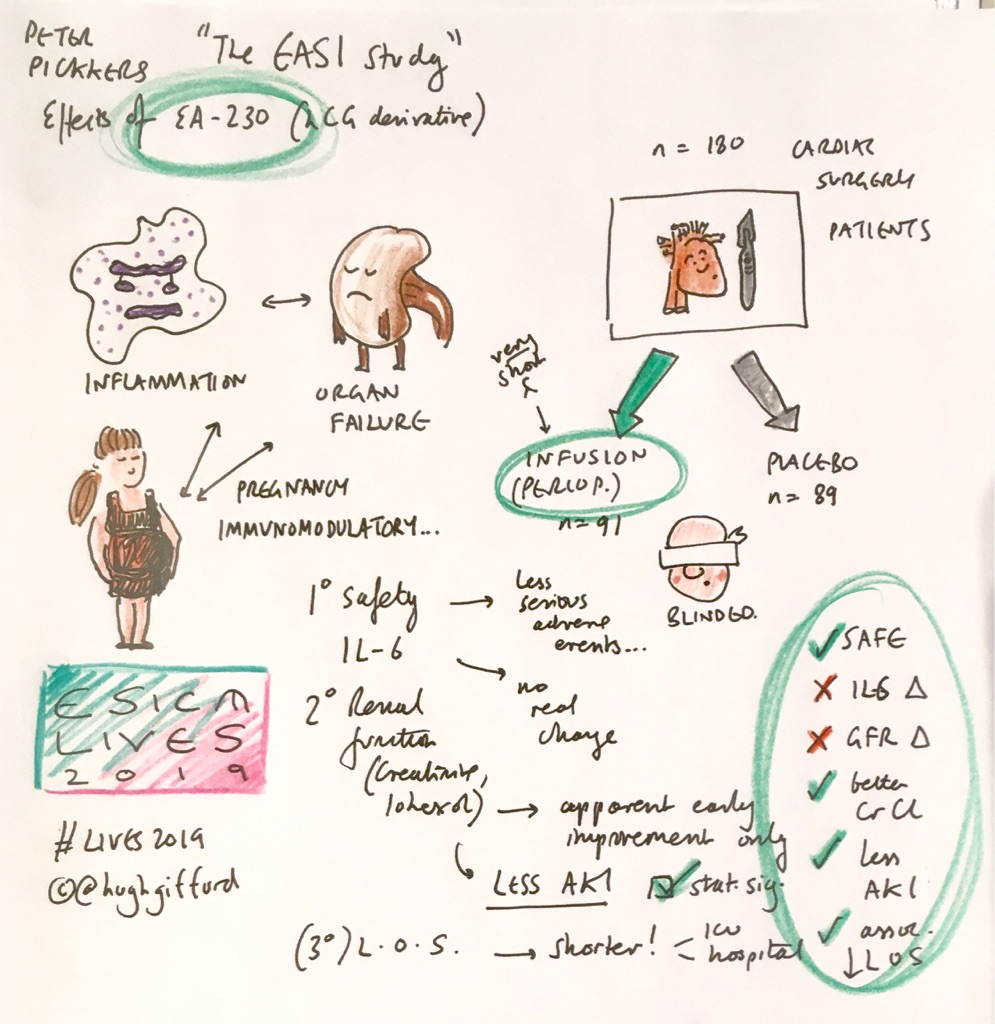 Peter Pickkers presented the findings of this phase 2 study into a beta-HCG derivative, thought to have immunomodulatory roles in line with the effects of normal pregnancy. An infusion of the drug EA-230 during cardiac surgery was associated with better creatinine clearance and less AKI, as well as a slightly shorter length of stay. Other mechanistic questions – such as an effect on IL-6 or GFR – were negative. It was a pleasure to hear about this group’s work. https://www.ncbi.nlm.nih.gov/pubmed/30724734 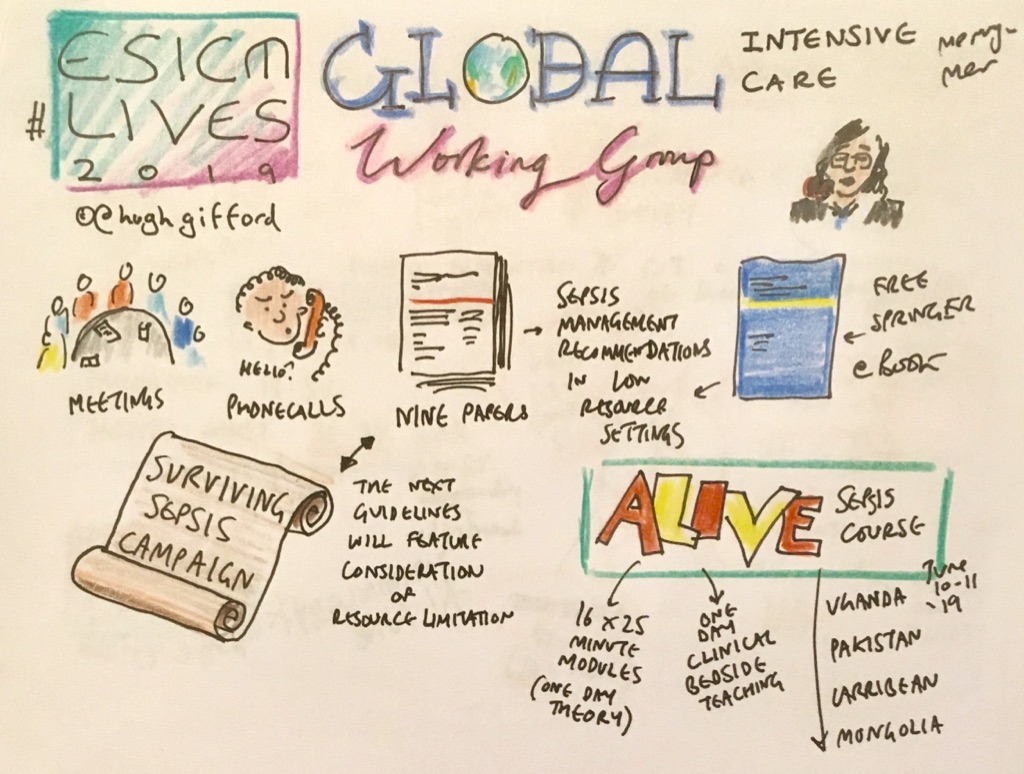 I was thrilled to have attended the Global Intensive Care working group meeting, having heard about it but been unable to see it advertised. After picking up the time and date on the grapevine, I had the opportunity to hear about the ongoing early work. Most excitingly, the ALIVE sepsis course has launched in Kampala, Uganda with Mervyn Mer and Arthur Kwizera. It’s set to travel to three other locations in the coming months. It is the first of its kind; one day of mini-modules and another day of bedside teaching in a LMIC setting. Amongst the remaining activity, I was excited to see the publication of the freely available Springer volume, Sepsis Management in Low Resource Settings: https://www.springer.com/gp/book/9783030031428 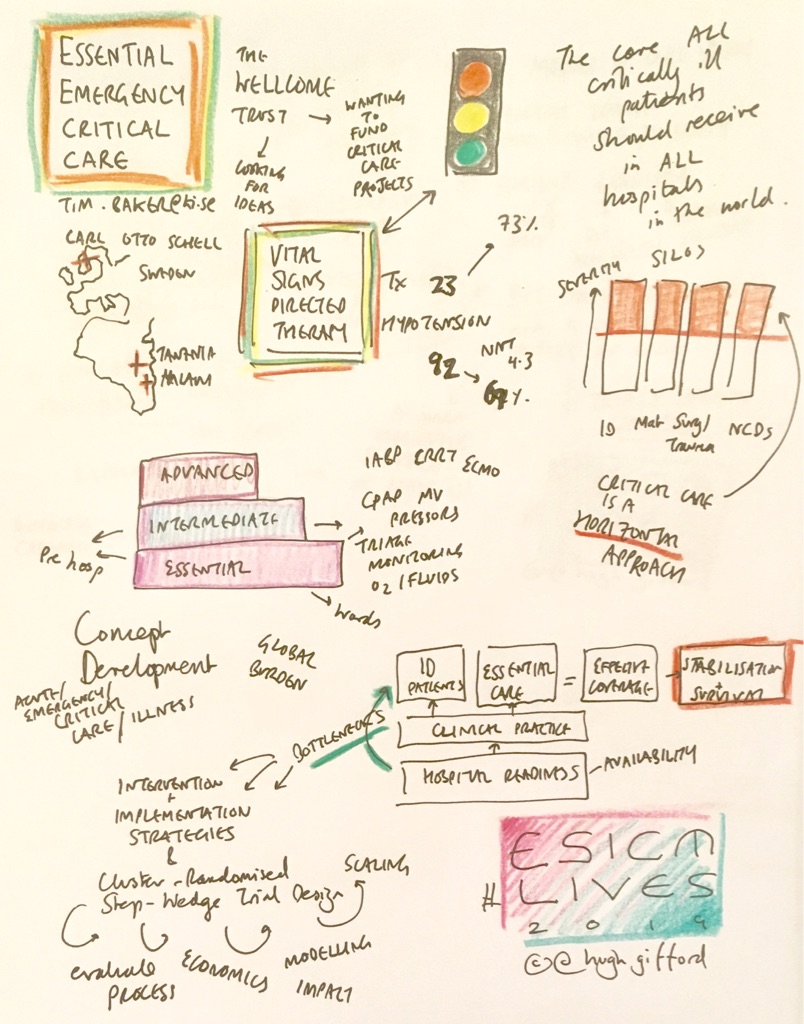 Members of the Global ICU working group included Tim Baker and Carl Otto Schell. They have completed the Critical Illness Prevalence and Outcomes Study (CRISPOS) in Sri Lanka, Sweden and Malawi, demonstrating the point prevalence of several markers critical illness. Furthermore, they have shown a mortality benefit to Vital Signs Directed Therapy where lives were saved “by a piece of paper.” Re-examining the paradigm of critical care in resource limited settings, they continue to develop concepts addressing the need to design services that save lives rather than simply emulate existing strategies. 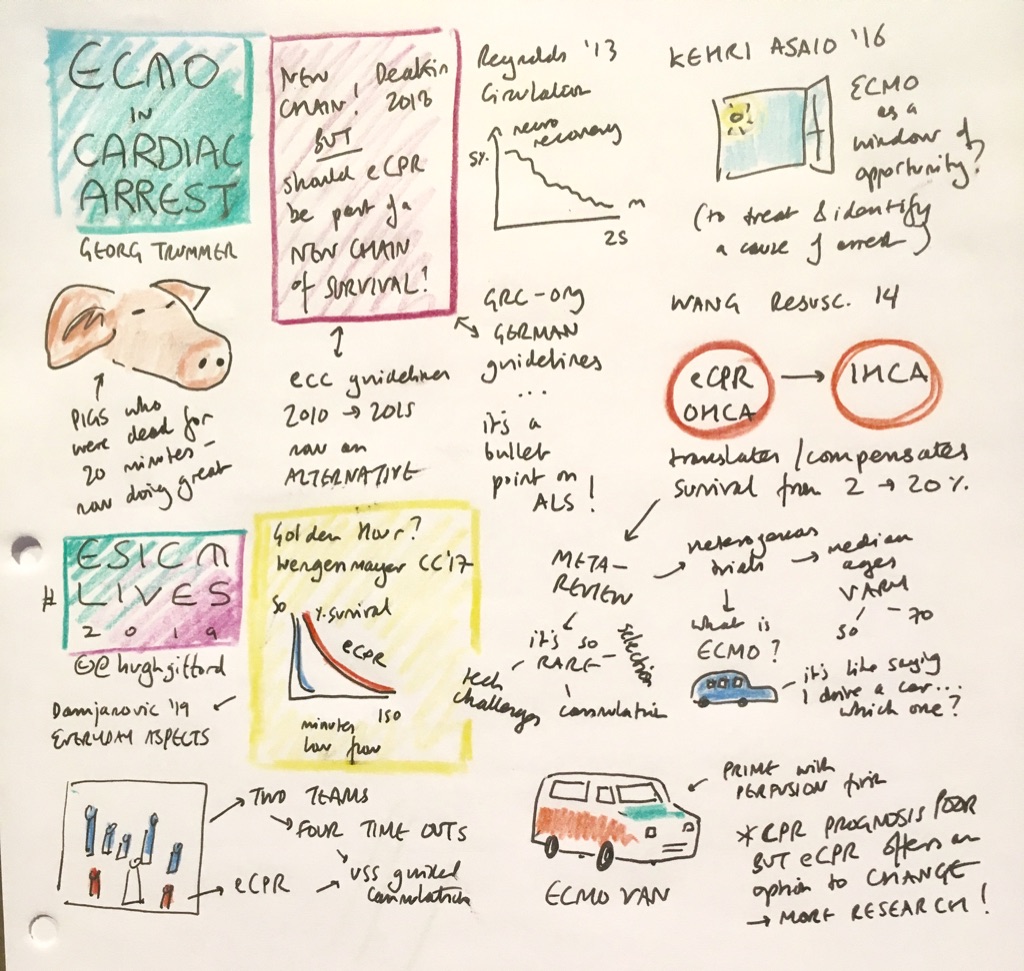 Georg Trummer discussed the use of ECMO in cardiac arrest as truly “buying time”. Perhaps eCPR should be part of a new chain of survival, opening a new window of opportunity? Experiments in pigs have shown excellent outcomes after a full twenty minutes of proper down time, he tells us. It is possible that eCPR could extend the golden hour, but the huge challenges in research, logistics etc make it difficult to see this should be implemented while questions remain unanswered. I note that Alberquerque, New Mexico, has just now set up the first eCPR service in the USA, arguably.

Lastly, Dominique Benoit discussed “Quality of Life as the Ultimate Goal?” His talk examined aims in treating the very elderly, so often a palliative population. On the other hand, these patients may be more accepting of poorer outcomes. He quoted the 20th century moral theologian George Dunstan, “the success of intensive care is not to be measured only by the statistics of survival, as though each death were a medical failure. It is to be measured by the quality of lives preserved or restored, the quality of the dying of those in whose interest it is to die and by the quality of relationships involved in each death.” https://onlinelibrary.wiley.com/doi/epdf/10.1111/j.1365-2044.1985.tb10852.x And in addition, he discussed ethical leadership, “being able to talk to anyone about anything”, composed of humility, vulnerability, altruism and courage, among other things. This was a moving and stirring talk and certainly a huge encouragement to this intensive care doctor.