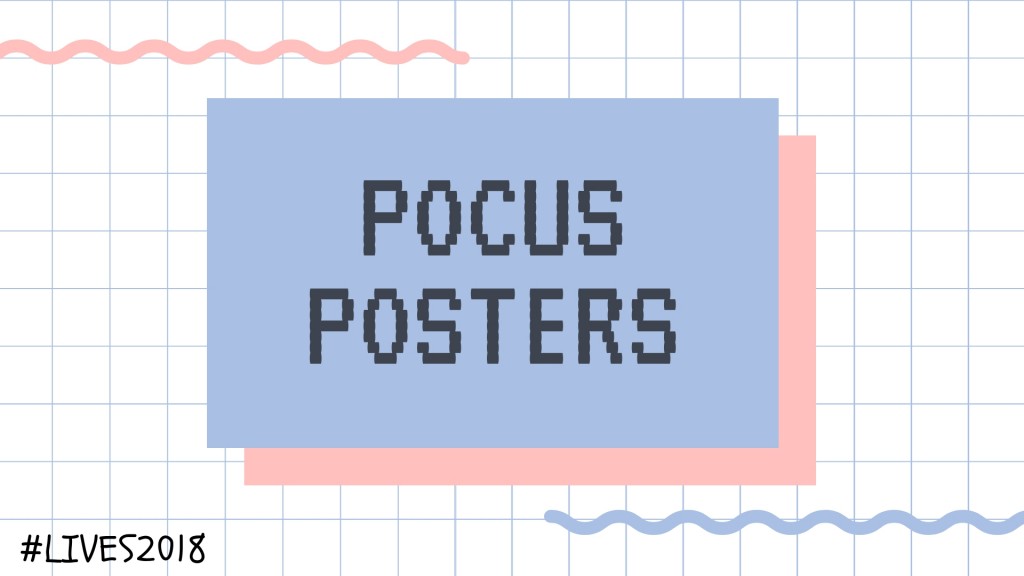 Once again, the recently concluded ESICM #LIVES2018  was a myriad of #POCUS goodness performed by colleagues across the world. In addition to the usual pre-congress Echo courses and State-of-the-Art sessions, the posters presented were equally impressive and educational. Here I’ve summarised just some of the posters that caught my eye (particularly the TDi of diaphragm and the UltraNurses study)

ps. don’t forget to listen to our podcast with Prof McLean and the amazing SICS group

INTRODUCTION. Tissue Doppler Imaging (TDI) is an ultrasonographic technique extensively used in cardiology to evaluate cardiac systolic and diastolic function. It uses Doppler to quantify the velocity of tissue rather than blood, and it, therefore, allows direct measurement of the velocity of moving tissue. TDI of the diaphragm has never being used so far to assess the characteristics of diaphragmatic contraction and relaxation.

METHODS. In twelve patients undergoing a T-piece weaning trial (9 weaning success and 3 weaning failures) a TDI examination of the diaphragm was performed. High quality images of diaphragmatic TDI were very easily obtained in all patients with a cardiac 4 MHz sector transducer. In all patients a nasogastric tube, equipped with two balloons for measuring esophageal and gastric pressures, was previously inserted for feeding purposes allowing for Pdi recording. Simultaneous Pdi and TDI tracings were recorded for 207 breaths in total (approximately 15 breaths/patient). For every breath, the Pdi signal was analyzed to measure the following parameters (fig 1): maximum Pdi (Pdi max), pressure time product (PTP), and the slope of the initial steepest part of the descending part of the Pdi curve, ie the diaphragmatic Maximum Relaxation Rate (Pdi-MRR). These Pdi-derived parameters were respectively correlated with the following TDI-derived parameters (fig.2): TDI peak contraction velocity, the velocity-time integral during inspiration (VTI), and the slope of the initial steepest part of the velocity curve of diaphragmatic motion during relaxation, ie, the TDI-derived maximum relaxation rate. The level of significance and the correlation coefficient were calculated for each comparison.

CONCLUSIONS. Our results suggest that TDI represents an ultrasonographic technique that can be used to assess features of the contraction and relaxation of the diaphragm, until now thought to be acquired only with Pdi recordings; it bears the additional advantages of all ultrasonographic techniques, ie, it is non-invasively performed on the bedside, compared to the cumbersome method of acquiring and interpreting Pdi tracings. Further studies are needed to demonstrate the potential utilities of this new ultrasonographic examination of the diaphragm in the everyday ICU practice. 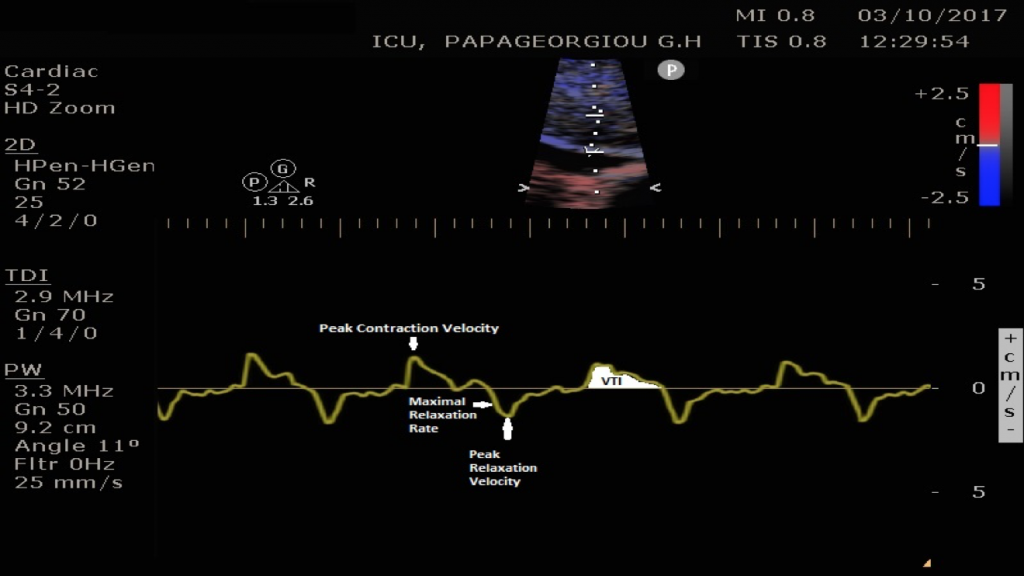 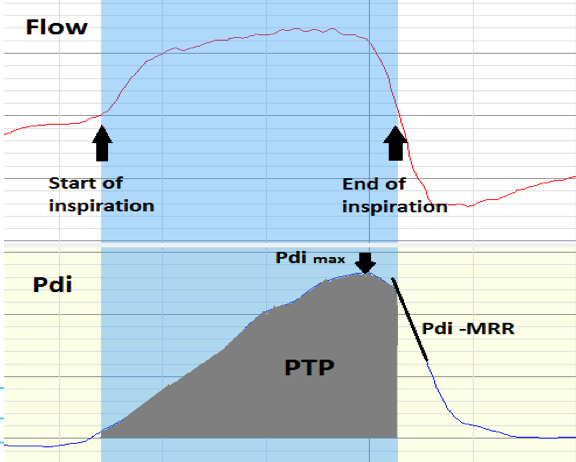 OBJECTIVES. To assess the feasibility of teaching bedside ultrasound to ICU nurses.

METHODS. We enrolled 8 ICU nurses into our UltraNurse training program that relied on a focused 3-phase approach [2] within our 24-bed university hospital ICU. First, these UltraNurses attended two 4-hour theory and practice sessions led by an ultrasound-certified intensivist. Our UltraNurse scanning protocol consisted of anterior and posterolateral lung ultrasound (LUS) imaging as well as measuring the left ventricular outflow tract flow velocity time integral (LVOT-VTI) using pulsed wave Doppler as a proxy for stroke volume. UltraNurses then performed 5 bedside ultrasound examinations under direct supervision. Finally, they continued performing bedside ultrasound examinations until full proficiency was reached. Every examination was supervised by ultrasound-certified intensivists and graded on dexterity, image quality and accuracy of interpretation, using Likert scales. A priori, full proficiency was defined as 5 consecutive examinations performed without assistance and interpreted correctly. Using structured questionnaires, UltraNurses were interviewed frequently to identify barriers and facilitators for our program. Data are given as medians and interquartile range.

RESULTS. All UltraNurses reached full proficiency status. This required 13 [12-18] examinations for LUS and 13 [11-16] for LVOT-VTI. Total time required to become fully proficient was 21 [14-26] weeks for LUS and 26 [19-29] weeks for LVOT-VTI. Figures 1 and 2 depict UltraNurse progress. Table 1 shows UltraNurse characteristics. Total duration of the program was 7 months in which 123 patients underwent 230 examinations. Varying support from intensivists and perceived high workload were barriers for our program while facilitators included intensivist enthusiasm, increased work satisfaction and improved perceived valuable contribution to the treatment team. 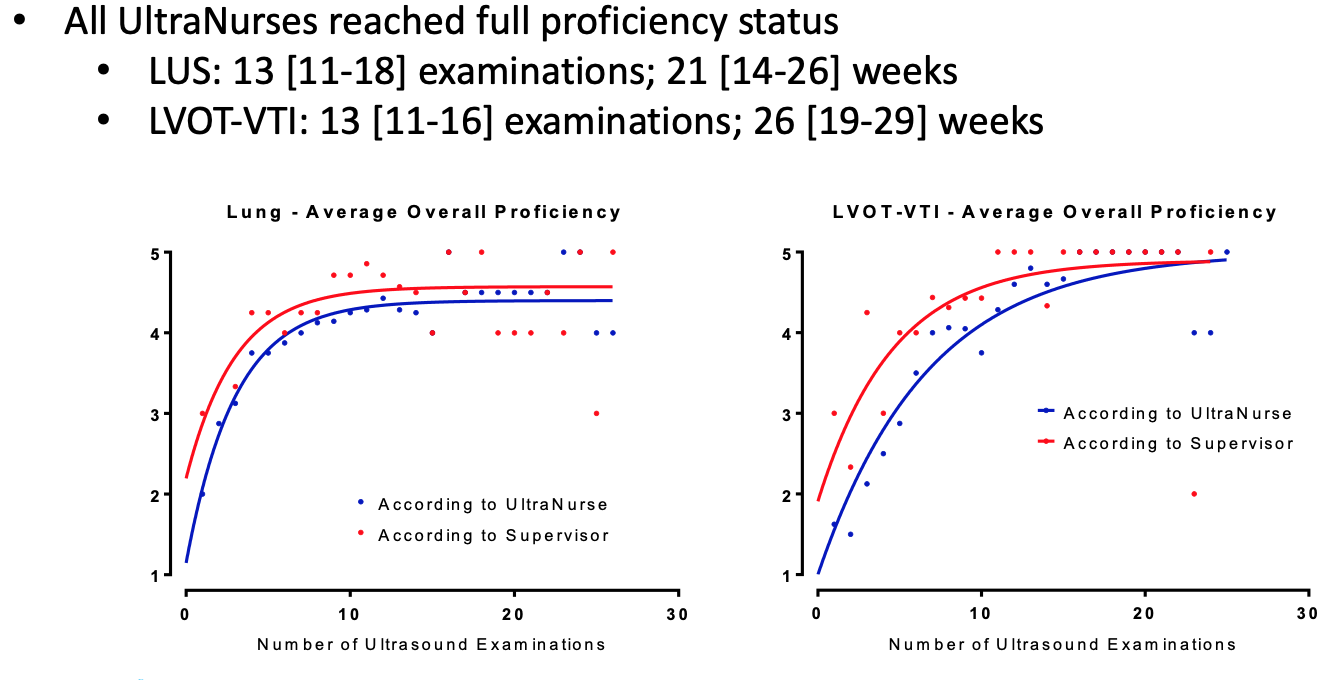 CONCLUSION. This is the first report to show that teaching bedside ultrasound to ICU nurses is feasible. The number of examinations to reach full proficiency for our UltraNurse protocol was small, although this took many weeks. Teaching bedside ultrasound to ICU nurses deserves widespread consideration. It holds great promise for increasing ICU nurse work satisfaction but most importantly for further improving management of our critically ill patients. We are currently evaluating the clinical impact of our UltraNurse program.

Could bedside ultrasound replace chest x-ray as the standard to detect complications and malpositioning of CVC lines?

INTRODUCTION. Complications arising from central venous catheter (CVC) placement are mostly due to pneumothorax or malposition . Correct position is currently confirmed by chest X-ray (CXR), while ultrasound (US) might be a more suitable option.

OBJECTIVES. We investigated whether CVC malposition and iatrogenic pneumothorax could be accurately detected by US compared to CXR.

METHODS. Design – Single-center prospective, observational study conducted at the VU University Medical Center in the Netherlands. The study population consisted of critically ill adult patients who underwent central venous cannulation of the internal jugular vein (IJV) or subclavian vein (SV). The US evaluation of pneumothorax and CVC malposition consisted of three parts; vascular US of the IJV and SV bilaterally, lung-US to detect pneumothorax and a cardiac US examination combined with contrast enhanced ultrasound. Primary outcome was the feasibility and accuracy of bedside ultrasound in detecting CVC misplacement. Regarding pneumothorax, the overall agreement percentage and Cohen’s kappa coefficient between US and CXR were secondary outcomes. 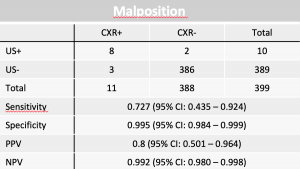 CONCLUSIONS. To our knowledge this is the largest study so far investigating the feasibility and accuracy of US to detect CVC malposition and associated pneumothorax. In conclusion, US is a suitable diagnostic modality to detect CVC malposition and iatrogenic pneumothorax with an excellent specificity and moderate sensitivity. Furthermore, US has multiple advantages over CXR in the critical care setting; it is performed faster and does not subject patients to radiation.

INTRODUCTION. Difficulty in weaning from mechanical ventilation is encountered in approximately 20% of patients in the intensive care unit.Recent investigations focusing on lung, diaphragmatic and cardiac ultrasound highlights the potential role of ultrasonography in prediction of outcome following extubation. The present study attempted to assess the ability of a combined lung, diaphragmatic and cardiac ultrasound protocol to predict weaning success and failure following extubation.

OBJECTIVES.
Primary:
1.To assess the ability of an Integrated USG protocol during weaning to predict weaning success or failure.
Secondary:
2. To assess the role of lung, diaphragmatic and cardiovascular dysfunction to failed weaning.
3.To assess the changes in Lung ultrasound Score (LUS) following SBT.

METHODS. All patients scheduled to undergo SBT were evaluated by USG to measure LUS, Diaphragmatic Thickness fraction(DTF) and changes in Velocity Time Integral (VTI) to passive leg raise at the beginning of SBT. Changes in LUS following SBT was recorded. Patients extubated following SBT were classified as weaning success if non invasive or invasive mechanical ventilator support was not required in the next 48 hours. 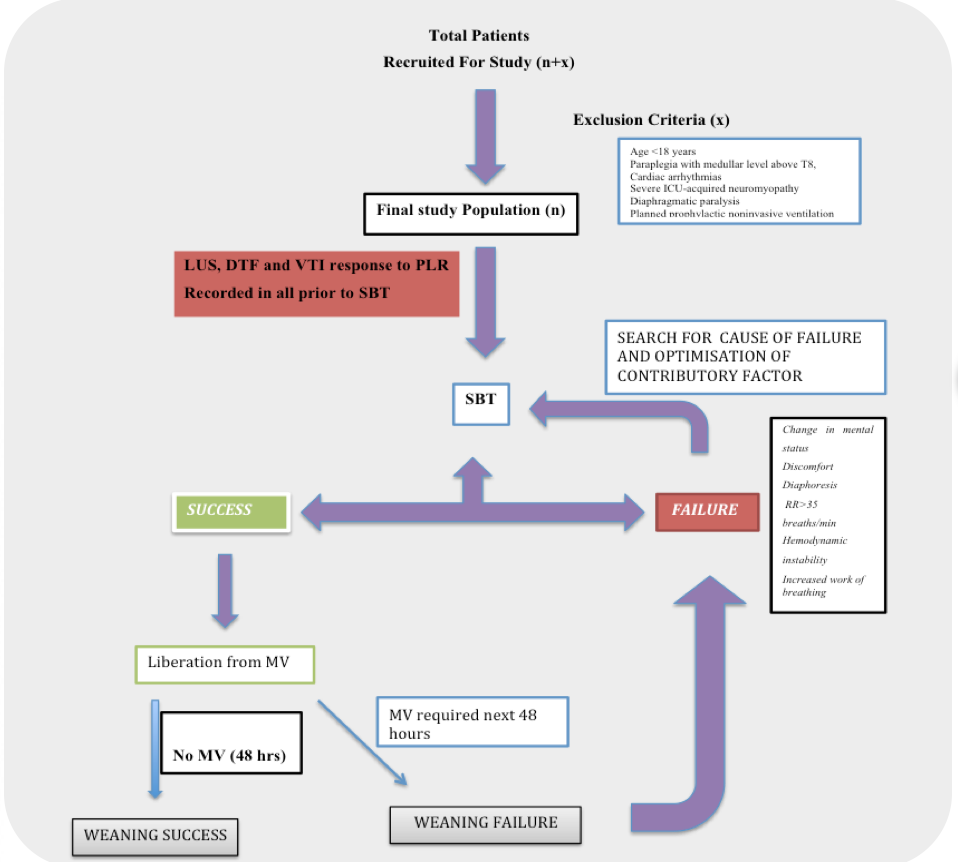 RESULTS. 60 patients who underwent extubation following a successful SBT were included in the study.27 patients(45%) required either non invasive or invasive mechanical ventilator support during the next 48 hours and were classified as weaning failure (Group F). Rest 33 patients were designated as weaning success (Group S).Patients in Group F had significantly longer ICU length of stay, higher LUS change during SBT(p< 0.001),lower DTF (p< 0.05) and showed lower VTI increment to PLR(p< 0.001).Using a binary logistic regression model,DTF< 26% (odds ratio 6.20,95% CI 1.06-36.04) and VTI change to PLR< 10.2% (odds ratio 6.16,95%CI 1.14-33.13) were found to be significant predictors of weaning failure(p< 0.05).The AUROC for VTI and DTF for predicting weaning failure were 0.79 and 0.64 respectively(Figure 1).

CONCLUSIONS. An integrated Ultrasound protocol using a combination of ultrasonographic parameters of lung, diaphragm and cardiac sonography was a reliable predictor of weaning failure. This study highlights the role of diaphragmatic dysfunction and preload independence of the heart in contributing to failed weaning, earlier detection of which may lead to better tailoring of therapy.

INTRODUCTION. Weaning failure (WF) in post-surgical patients may be due to lung and diaphragm dysfunction; they can both be assessed by ultrasound (LUS and DUS), helping in predicting WF.1

OBJECTIVES. To assess lung aeration and diaphragm activity in post-surgical patients to early identify those at risk of WF.

METHODS. Prospective observational monocentric study. We enrolled ICU post-surgical adult patients within 24 hours after extubation. They were in spontaneous breathing and had no neuromuscular diseases. LUS score for aeration assessment was computed: sternum, anterior and posterior axillary lines define anterior, lateral and posterior regions, each divided in superior and inferior to have 12 areas per side; in each area a score from 0 (normal aeration) to 3 (complete loss of aeration) was given.2 Global and anterolateral scores corresponded to the sum of all and anterolateral areas’ score respectively. DUS analyzed right thickening fraction (TF=(expiratory – inspiratory)/inspiratory thickness*100) and caudal displacement (CD).1 WF was defined as NIV/reintubation within 48 hours after extubation.

CONCLUSIONS. Preliminary data suggests LUS score, but not DUS, is useful to predict WF in post-surgical extubated patients. Data need to be confirmed in a wider population.

BACKGROUND. In ICU patients deciding the optimal timing for extubation is challenging and clinical predictors are not very accurate. Ultrasonographic assessment of the diaphragm function has been used to predict successful extubation.1 However, cardiorespiratory function also greatly impacts a patient’s ability to wean from mechanical ventilation.

OBJECTIVE. To assess if a combination ultrasound measurements of the diaphragm, heart and lungs could predict extubation success more accurately than using single-organ ultrasonography assessment.

RESULTS. In this interim analysis, 39 patients were included of which 77% were male, with a mean age of 61 (±17) years and a median of 126 [95-207] and 96 [84-185] hours on mechanical ventilation in the successful and failed group, respectively. Of these patients, 7 (18%) required reintubation within 48 hours. Patients in need of reintubation compared to patients who were extubated successfully had no significant difference in TFdi% (21.2% vs. 25.5%; p=0.36), left ventricular function (72% good vs. 71% good, p=.94) or B- lines (17 [9-24] vs. 7 [3-15] p=.072), although a trend for more B-lines was observed in the extubation failure group. Multivariable regression analysis showed that addition of B- lines and classic parameters such as PaO2 and FiO2 to the thickening fraction has added value in predicting extubation (Table 1). This was not the case for LVF. 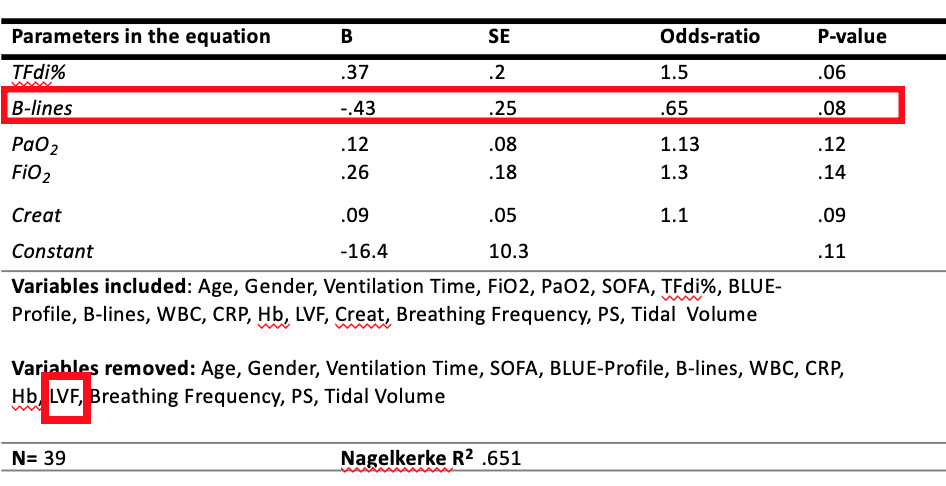 CONCLUSION. The results of this study suggest that addition of lung ultrasound to diaphragm ultrasound might have added benefit in predicting extubation success, while for LVF this does not seem to be the case.

BACKGROUND. The BLUE protocol was developed to match artifacts of lung ultrasound (LUS) with the final diagnosis in patients in respiratory distress presenting to the emergency department. Since then, it has found its way into routine use on the intensive care unit (ICU) to assess respiratory failure [1]. However, the diagnostic accuracy of this protocol has never been verified in an ICU setting.

OBJECTIVE. We set out to determine diagnostic performance of the BLUE protocol in ICU patients undergoing thoracic CT-scan.

METHODS. This prospective single center observational study included patients admitted to our 24-bed university hospital ICU who underwent thoracic CT scan. LUS was performed within 3 hours of the CT scan according to the BLUE protocol without venous analysis [1]. The ultrasound operator was blinded for the result of the CT scan. Additionally, an intensivist, blinded for the result of the CT scan, provided a BLUE-protocol diagnosis (pulmonary edema, pneumothorax, obstructive lung disease and pneumonia) based on the LUS findings in combination with clinical information. The reference test was the diagnosis made by one radiologist based on the CT scan.

RESULTS. 61 patients, of which 41 were male, were included with a median age of 61 (IQR 25). Of all diagnoses, signs for pneumothorax yielded the highest effective accuracy with 89%. Overall diagnostic accuracy of the BLUE protocol was 48%. Intensivists diagnosis based on LUS and clinical findings yielded an accuracy of 62%. Sensitivity, specificity, PPV and NPV for the four final diagnoses are shown in Table 1.

CONCLUSION. In ICU patients undergoing thoracic CT, the highest accuracy of the BLUE protocol without venous analysis is 89% for pneumothorax, while overall accuracy is 48%. When LUS findings are combined with clinical findings its accuracy increases to 62%.