Getting the most out of arterial blood pressure monitoring (M Pinsky)

Systolic AP (which changes depending on where you measure it)

Sepsis reverses the normal pulse pressure amplification down the arterial tree – therefore you would be underestimating the pressure in the aorta. 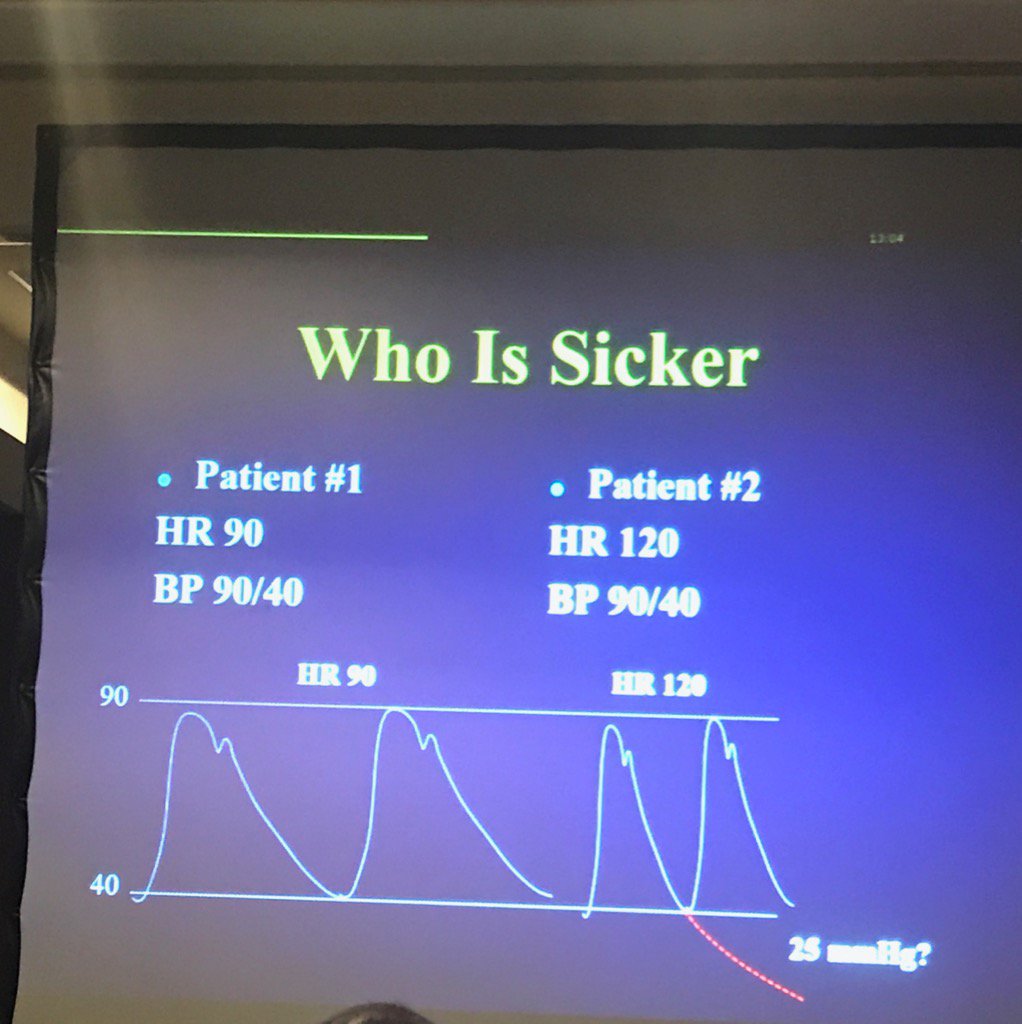 Faster heart rate means that the diastolic pressure hasn’t had time to stabilise – it may actually be much lower (vasodilatation). Increased HR is the main physiological response to vasodilation to maintain diastolic pressure.

The Use of Pulmonary Artery Catheter in Sepsis Patients: A Literature Review

National Trends in Use and Outcomes of Pulmonary Artery Catheters Among Medicare Beneficiaries, 1999-2013

Perioperative cardiovascular monitoring of high-risk patients: a consensus of 12

Right Atrial Pressure in the Critically Ill: How to Measure, What Is the Value, What Are the Limitations?

CVP still the most used variable to guide fluid management in FENICE!

Systematic review including re-analyses of 1148 individual data sets of central venous pressure as a predictor of fluid responsiveness.

Where is your reference/zero point???

What point of the wave are you recording your value?

CVP is best used with some measure of flow. Fall in CO with fall in CVC = return function (volume) problem. Fall in CO but rise in CVC = primarily pump problem

Most useful in response to therapy.

Fluids after cardiac surgery: a pilot study of the use of colloids versus crystalloids. 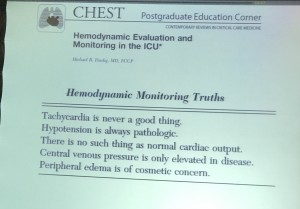 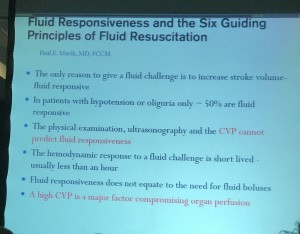 Does central venous pressure predict fluid responsiveness? A systematic review of the literature and the tale of seven mares.

Central venous pressure is a stopping rule, not a target of fluid resuscitation.

VO2 – normal physiology: CO increases in proportion to VO2
In young adult, can increase >12 fold i.e. from 0.25 to >3L/min
What regulates CO? ——> metabolism (assuming normal Hb and SpO2)
Normally DO2 does not determine VO2 —> determined by metabolism
DO2 = CO x Hb x k x SpO2
DO2 = CO * Hb * O2 sats (Hb and sats less amenable to intervention. Therefore, to increase DO2, need to increase CO)
CO has 2 components — cardiac function (LH/RH/Pulm circuit) and return function
Increase in cardiac function = Increase CO for same preload
Flow = Stressed volume/Venous compliance x Venous resistance
Needs to be a compliant region to have flow
SV out is what we normally focus on but also SV IN
Heart has a permissive function. Allows the veins to empty
Volume is not a physiological regulator of CO
Physiological approach
BP = CO x SVR
Measure:
Is the CO decreased? or Is the CO normal/increased? in which case it’s the SVR
CO down?

Volume and its relationship to cardiac output and venous return

Fluids after cardiac surgery: a pilot study of the use of colloids versus crystalloids.

Stressed vs. unstressed volume and its relevance to critical care practitioners

Blood pressure is not the same as cardiac output or flow

Vascular Adaptation to Exercise in Humans: Role of Hemodynamic Stimuli

Occult hypoperfusion and mortality in patients with suspected infection

Unstressed volume does not generate a pressure.

Addition of vasopressors can increase cardiac output by altering the stress:unstressed volume relationship

Fluid administration in severe sepsis and septic shock, patterns and outcomes: an analysis of a large national database

Pharmacodynamic Analysis of a Fluid Challenge.

Association of arterial blood pressure and vasopressor load with septic shock mortality: a post hoc analysis of a multicenter trial

Can one size fit all? The fine line between fluid overload and hypovolemia

52% of pts who present in circulatory shock will not be fluid responders!

Limitations of PPV or SSV to predict responsiveness

4 stages of shock:
Amended by Ince:
Sepsis is a disease of the microcirculation. All 5 present
Systemic variables are a surrogate for abnormalities in tissue perfusion
All drugs focused on systemic haemodynamics in expectations tissues will improve perfusion
If doesn’t work – unresponsive i.e. dont know what is going on!
Microciculation
Need ATP for Na-K pump
Shunting model of sepsis
Implication: That active recruitment of the microcirculation is an important component of resuscitation
Haemodynamic coherence: Resus concept that says that when you resuscitate a systemic variable you expect a parallel improvelemt in microcirculation and tissue perfusion
4 area:

The endothelium in sepsis

Hemodynamic coherence and the rationale for monitoring the microcirculation

A few of our favorite unconfirmed ideas