This trial looked at all comers with necrotising soft tissue infections and was a blinded RCT using IV IG versus placebo.  They found no difference. Does this mean we should stop giving what is an expensive treatment with no benefit to people with necrotising fascitis? Not sure yet…

Read the paper when you can…

Interesting observational study that shows that these things do predict mortality.  But this is an association – is more work needed progress this?  It uses the “sedation index”  taking the mean of the sedation part of the RASS scores for a day.

The SPICE-PAD Study
Looked at early pain, agitation, depth of sedation and mobilisation as predictors of 180-day mortality#LIVES2016

This trial IS available to read here.  Also its PI Ed Litton is on twitter and seems very amenable to interaction! Overall It didn’t show a benefit of infusing Iron.  Enteral iron doesn’t work in ICU pts as hepcidin (the “master regulator”) is generally raised as an acute inflammatory marker and prevents absorption, but previous reports of reaction to Iron infusions have put people off using it – IRONMAN showed it is safe in ICU patients.  But its not an effective way to reduce transfusion, although it may have suffered from being underpowered.

This trial (also published in ICM) looked giving Nitric Oxide to children on bypass – previous data has been encouraging. The rationale is that bypass causes SIRS (from contact activation, ischaemia reperfusion, direct myocardial injury & transfusion) and that NO may help prevent this  – it decreases infarct size in ischaemia reperfusion in rats for example, and recent adult trials have been positive.

Rationale 3
Adults having AVR under bypass in 29 patients had less infarct with nitric administrationhttps://t.co/nL5IlybjCl#LIVES2016

Headline from this trial was that Steroids don’t prevent septic shock.  The trial was contemporaneously published in JAMA.

Some good comments after the presentation from Todd Dorman (SCCM president) – The study was probably underpowered (as septic shock was only present in 20% of patients), the finding that in the group who received steroids there was less delirium is “interesting” and recruitment was prolonged – 5 years a long time in ICM and background care probably changed a fair amount over that time.

Interesting study that tried to test the idea that dexmetotomidine is immunonodulatory and therefore useful in sepsis (as a sedation agent).  It made no difference to the outcome (ventilator free days or mortality) but:

A fair comment was made that as an open label trial, it carried a high risk of bias which makes the “quality of sedation”  finding more difficult to interpret.

Last but not least…

This neat trial from Jean-Baptiste Lascarrou (available on twitter) looked at a video laryngoscope called McGrath and tried to see if it could increase first pass intubation rates from 65% to 80% compared with direct laryngoscopy with a macintosh blade. In the end it didn’t and both groups had a 70% first pass rate.  The interesting thing was, as you might expect if you regularly use these devices, that the reason for failure was different – In some ways it is a compromise between getting a good view (harder with mac) and getting the tube in (harder with a video laryngoscope in this case McGrath)

Excellent introductory slide from Giuseppe Citerio about options currently available for monitoring so have bumped it to the top: 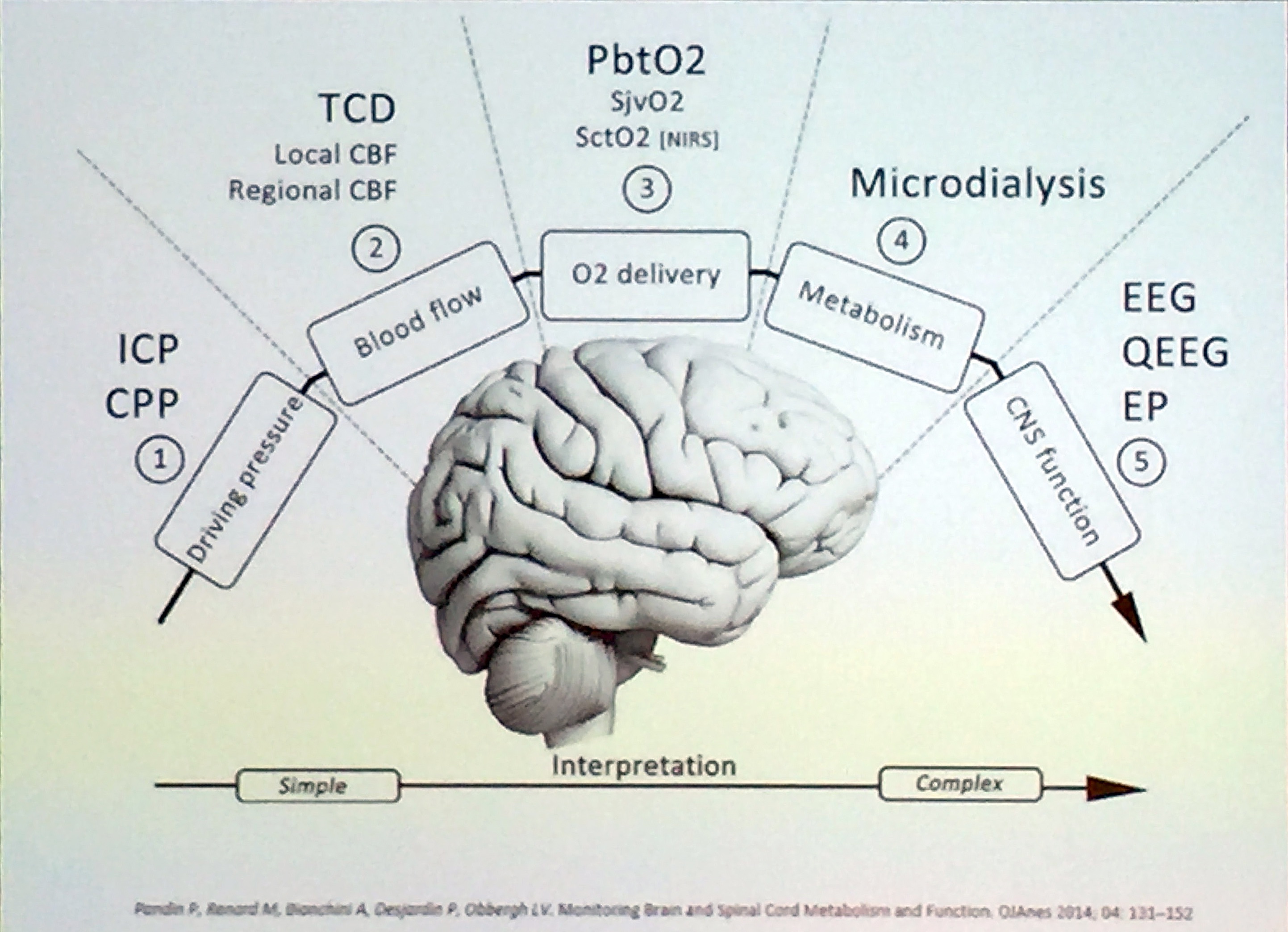 Also worth looking at – nice review on neurological prognostication after cardiac arrest: 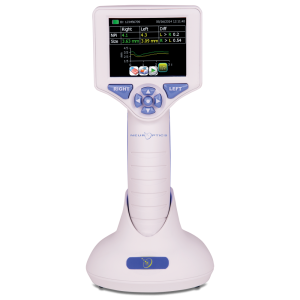 In cardiac arrest, during CPR – possible to detect recovery of light reflex with pupillometry. Linked to survival v no reflex: https://www.ncbi.nlm.nih.gov/pubmed/22659054

Firstly NIRS – what exactly are we measuring and how?

Early discussion of limitations. Light scattering by tissues. A fair number of estimations so no actual value for cerebral oxygenation e.g. variation in diffusion path-length factor (DPF) between patients and injuries may affect values .

NIRS in subarachnoid haemorrhage: no relationship between absolute rSO2 values and DCI

Question: Could NIRS be more useful as a dynamic variable rather than static number? Overwhelming take home from talk was a lot of concern about use of NIRS outside operating room. Potentially of use post-cardiac arrest and in ECMO

Quantitative EEG: Ready for use by general intensivists? – Giuseppe Citerio

Continuous EEG gives us more information than we had before and as a consequence can potentially do things differently e.g. intervene earlier

Caution though: James Cash Penney – “Theory is splendid but until put into practice, it is valueless”

Potential is huge though

This was a very well attended session that began with Richard Beale taking the room through the history of EGDT – Stephen Cains dog studies showed the link between oxygen delivery and consumption, then Schumaker and Shoemaker (there is a difference!) took the concept into humans and then we had Rivers now famous study.  What i found interesting was the paper by in JAMA (http://ja.ma/2dm4K0e) from surgical patients in the early 90s which really re-ignited the idea of goals and targets, albeit in the more controlled post-op surgical insult population, but this was a key driver for Mani Rivers protocol in his study.

Linear relationship (in dogs) in the 70s between oxygen delivery and oxygen consumption discoveredhttps://t.co/6lwSENGI3Z#LIVES2016 pic.twitter.com/EXfWFQEBUF

Fascinating discussion at #LIVES2016 – does this paper has a lot to answer for? Richard Beale on history of EGDT
https://t.co/SH69OQ5wHF

Then Derek Angus gave his presentation which is also going to be available (along with my interview with him afterwards) on the ESICM website to watch.

Angus:
Many patients may have been missed from the sepsis trials
– "cryptic" shock
– prehospital setting
– developing world#LIVES2016

Then Andrew Rhodes talked about the future and gave some common sense advice on how to treat sepsis.  The room was full – so as JLV said today, that means we still have a problem in how to treat sepsis! Will top the bill at conferences for some time to come yet…

Rhodes:
Lactate normalisation is reasonable marker and way to approach sepsis care & there is new evidence its good thing to use#LIVES2016

Rhodes:
For sepsis
Stay by the bedside
Reassess pt and pts volume status
Watch how they improve or don't with resuscitation#LIVES2016

Use of ultrasound guidance for central venous catheterization: a national survey of intensivists and hospitalists: https://www.ncbi.nlm.nih.gov/pubmed/27491563

Practice of ultrasound-guided central venous catheter technique by the French intensivists: a survey from the BoReal study group: https://annalsofintensivecare.springeropen.com/articles/10.1186/s13613-016-0177-x

CVP can be thought as “preload” or as “outflow pressure”

CVP does not tell you blood volume

CVP does not allow you to reliably predict fluid responsiveness

Measurement is zeroed at the level of the stopclock

I'm not sure if i agree with all the conclusions #LIVES2016 pic.twitter.com/wBWT4FAE6r

Measurement of central venous saturations can be measured continuously or intermittently

Mixed- vs Central- venous saturations are comparable, normal central lower by 2-3% in health

Some formulas to understand pCO2gap JL Teboul.
With physiology we can still use pencil and paper to understand things #LIVES2016 @ESICM pic.twitter.com/oXq2n4MrLC