The ESICM meeting traditionally opens on the Sunday evening, with a plenary speech and ceremony.  This year was in Vienna so clearly classical music was going to be involved- A quartet of violins wading through the audience, with drum beats behind! (see this short periscope clip!)

There was a great talk on psychological safety from Amy Edmondson (her TED talk is viewable here) and Peter Suter the first ever president explained the history of ESICM (“ESICM 1982-2017: From pampers to maturity and excellence”).  Members can view these opening ceremony talks in full here.

All the past presidents of ESICM were present as to celebrates 35 years of the society.  They did a special jigsaw on the stage to celebrate!

The Ex presidents do a jigsaw #LIVES2017 pic.twitter.com/JMH9RPtvJv

I am still not sure what the question is (?!), but this poll at the start of this session looked like tele-ICU didn’t answer it….

The first speaker was Charlie Corke from Australia, who talked about what it meant to him – “Failure to rescue in the wards: human factors and technology”.  He talked through the 2004 ACADEMIA study – this was a collaboration and comparison between the Intensive Care Society and Australia’s ANZICS group that showed “bad things happen before Intensive Care admission”.  The following year the (in)famous study of rapid response MET teams (the MERIT study) was published, which failed to find any effect on cardiac arrest, unplanned ICU admission or unexpected death from the activation of these teams.

He then seemed to be making a call to arms for remote monitoring, but didn’t seem to know of many of the recent advances is the field!  The audience helped him out – there are a lot of remote monitoring and tele-medicine advances in monitoring respiratory rate, but none quite at full clinical roll out stage yet… (for example http://www.oxehealth.com/ or even http://www.acupebble.com/)

Then Richard Beale took to the stage – High cost or cost saving? was the topic.  He recommended this JAMA paper.  It defines the tele-intensive care unit nicely as:

A tele-intensive care unit (ICU) is a promising technological approach designed to systematically alter processes of care that affect outcomes. Tele-ICU can be defined as the provision of care to critically ill patients by health care professionals located remotely. Tele-ICU clinicians use audio, video, and electronic links to assist bedside caregivers in monitoring patients, to oversee best practice adherence, and to help create and execute care plans. Tele-ICU programs have the potential to target processes that are associated with better outcomes, including shorter response times to alarms4 and abnormal laboratory values,5 more rapid initiation of life-saving therapies,6,7 and higher rates of adherence to critical care best practices.8

These systems seem to save money… So they are probably coming to a (large?!) unit near you soon.

The Emory programme was associated with a $1500 reduction per patient over 30 days (eICU Philips system) https://t.co/XyOU1Rs3oa #LIVES2017

Then my favourite talk of the session was from Marius Terblanche (follow him on twitter) who had spent a lot of his early consultant life implementing a tele-medicine system in Guys and St Thomas’s hospital in London.  He gave a refreshingly honest account of this, and recounted the problems he faced as he went along.

He ran through all the lessons he had learned, including simple things like the need to consider the “estate” – he found that background noise was a problem for cameras and microphones.  But the biggest problem the implementation faced was convincing people to change -disruption to job plans, ways of working etc.! Trying to create and convey a “sense of urgency” and need was tricky, he found that without an influential “guiding coalition” it was hard to move forward (not necessarily just powerful – an interesting distinction).  He admitted that without a clear vision to communicate, it is hard to convince people to undergo such big change and that he felt that he could have done that better.  He also thought that it was/would have been important to create short term wins with such a project, and also not to announce success too early.

Are you trying to do something similar and want to know more?  Well his recommended reading was not about tele-medicine or technology, but change management – and John Kotters 8 steps.

Forget the technology that's not the problem

Overall an inspiring talk and a great debate at the end with audience pitching in.  Prof Bion raised the major challenge with tele-ICU – and our challenge to avoid as these systems become more widespread:

Claudio Ranieri starts us off with a discussion and reminder about the importance of transpulmonary pressure- elegantly described in this excellent NEJM paper http://www.nejm.org/doi/full/10.1056/NEJMra1208707?af%3DR%26rss%3DcurrentIssue … 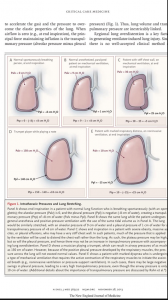 Titrating ventilation to transpulmonary pressure may have a mortality benefit, as seen in this H1N1 series ncbi.nlm.nih.gov/m/pubmed/22323…

Targeting low transpulmonary pressures isn’t just of benefit to those with ARDS- surgical patients (nejm.org/doi/full/10.10…) and organ donors (ncbi.nlm.nih.gov/pubmed/21156950) have both seen benefits from a lung protective approach.

There is some evidence that ventilator induced lung injury causes direct neurological damage (ncbi.nlm.nih.gov/pubmed/23962032)- could this be directly contributing to the delirium we see?

The tech lounge opened on Monday morning with a bang – loads of giants in the field chatting and presenting in an informal zone.  Super busy, people everywhere –  standing room only!

Leo Celi from MIT gave an inspirational talk about data – its impressive what he has set up.

He recommends this (free online) book that he and others wrote if you are interested in the field (http://www.springer.com/gp/book/9783319437408) and he is clearly passionate about getting people involved and doing “big data” properly – hackathons and datathons galore in europe and abroad (plug alert – if you are interested in them see this one in London in December with Mervyn Singer et al.)

Another good editorial that Leo recommended to read is this one in the NEJM (not paywalled!) http://www.nejm.org/doi/full/10.1056/NEJMra1614394

He made the point that AI has come a long way, but we need to be careful to do it properly so as not to over sell the field, which is still in its infancy.

Successes he quoted include Articial intelligence diagnosing diabetic retinopathy but he was scathing about IBMs Watson – calling it a “digital canary” and the AI equivalent of a mechanical turk (a sham chess “computer” with a human inside) His point was that it is not truly harnessing data on its own, and so should not be claimed that it is – although important on the way to doing that.

2. Does not have a connected cohort of data feeding into it

Then Derek Angus gave a really easy to understand run through of how big data and RCTs can coalesce and we can really harness the power of data to help us do what we do.

Derek talked about two trials that are currently running “within” the electronic health records systems in the USA, which cost 10% of the equivalent traditional RCT so you can see why these techniques are attractive.

His concept is to remove the bias from randomisation alteration by clinicians (based on initial results of studies) and handing that over to computers in a concept known as “response adaptive randomisation”.  I have tried to capture it in this thread:

A story of A against B by Derek Angus#LIVES2017

An exploration of what questions big data might answer followed from Theodoros Kyprianou.  What is big data?:

What is big data then? #lives2017 pic.twitter.com/TfnjA7VuMU

He took the gathered crowds through the different ways machine learning can occur on the ICU (and in healthcare generally); to recap there is

Unsupervised learning – data given to computer and outcomes not known, computer tries to sort data into its own groups

He talked about the sort of things where this might be useful to clinicians – for example in making simple choices and decisions, or creating healthcare and illness classifications or even making diagnoses.  An interesting possibility was letting machine learning do the “physiological fine tuning” on a unit.

Overall this session was really fun and it was great to hear from all the speakers on how machine learning is being used currently but also “future gaze”; inspiring to think what our units and hospitals might look like one day!