Coma recovery score (revised) is used more prominently in the recovery literature which is validated in disorders of consciousness.

Carinal stimulation via suctioning rather than pain may be a more useful way of generating arousal.

Data from the IMPACT trials have been used to create a risk prediction model which is available online.

Alpha coma on EEG may have a poor prognosis but the cause is important to the outcome. 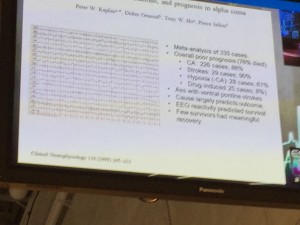 Anti-N-methyl-D-aspartate receptor antibodies: A potentially treatable cause of encephalitis in the intensive care unit