Could be randomised up to 10/7 post injury and must have had first-level interventions to treat it (head up, CSF drainage, etc)

If could not be controlled with hypothermia had barbiturates or hypertonic

No significant differences in baseline characteristics including age, severity of injury, APACHE, etc AND neurosurgical intervention prior to randomisation

No difference in pneumonia rate between two groups 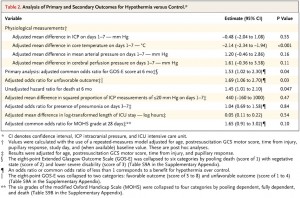 Conclusion: Titrated hypothermia to reduce raised ICP in addition to standard care did not improve outcomes but and increased mortality

After this, open label catecholamines could be added but would be weaned first

Fluid requirements and lactate concentrations much this same

No difference in mortality. No benefit to adding steroids.

Number of patients who required RRT was significantly lower (ARR 10%) than those who didn’t but once you needed dialysis, duration of that was the same

Conclusion: Early vasopressin maintained BP and reduced noradrenaline requirements as well as reducing the need for RRT but did not reduce the number of renal failure free days

NIV does reduce intubation rates in these patients in older trials (but at that time, mortality for intubation was 80% rather than the lower values found in modern practice)

No difference in mortality at 28 days

Didn’t matter what diagnosis was (i.e. solid organ or haematological malignancy). However, was powered for mortality of 35% in oxygen group and was much less than this.

No difference in intubation rates, length of ICU stay, 6/12 mortality

Conclusion: Early NIV did not reduce mortality compared with O2 but study underpowered as mortality much less than was predicted.

EPO has a long history: EPO-2 EPO-3 may reduce mortality in trauma but concerns about thromboembolic events and efficacy have limited application.

EPO is a pleiotropic cytokine and receptors exist in the blood-brain barrier. In response to hypoxia EPO is produced within the brain. Hence worthy of investigation:

No effect on proportion with severe disability at 6/12

No increase in thrombotic events (including VTE and MI) 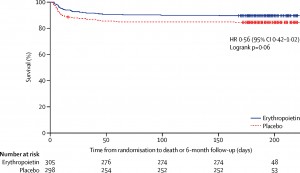 Becomes significant after sensitivity testing but this is exploratory

Rates of proximal DVT in TBI 17%

Conclusion: Following moderate or severe traumatic brain injury, erythropoietin did not reduce the number of patients with severe neurological dysfunction (GOS-E level 1–4) or increase the incidence of deep venous thrombosis of the lower limbs. The effect of erythropoietin on mortality remains uncertain.